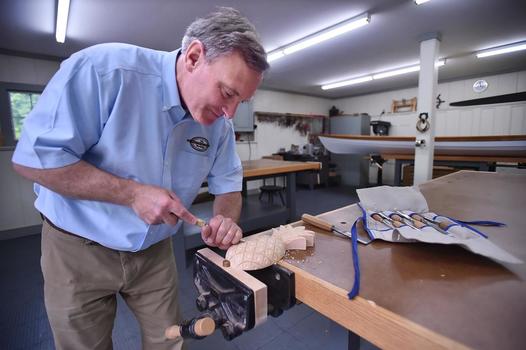 DEEP RIVER — Walk into Peter McKenna’s workshop behind Murphy’s house (Murphy is a rescue cat and is very curious) and you feel you are in an annex of Mystic Seaport. On the east side are two gray Chesapeake Bay retrievers who also want a part of the action, but can’t because of a fence.
Inside the Nautical Arts Workshop, the first item that hits your eye is an 18-foot lapstrake pulling boat, like the Whitehall varieties but a bit narrower. “I’ve been working on this for about four years, but it should be ready soon.”
The next thought that hits you is: This is awfully neat for a workshop. There is no dust anywhere and items are arranged, some labeled and some not.
Keep looking around and you see what looks like a sawed-off lathe, which it turned out to be. “That was my father’s,” McKenna said. “I modified it because many of the pieces turned aren’t that big, so I cut it in half.”
Displayed all around are eagle carvings, a Nantucket basket, a deck cleat cutting or serving board, his father’s workbenches (all wood — no metal screws), a pineapple, and hundreds of hand tools strictly used for shaping wood.
The North Shore of Long Island in Setauket, N.Y., is where McKenna grew up under the nautical influence. Even his high school (Ward Melville (after Herman) smelled of the sea.
He learned the basics of wood carving and then some from his father, graduated with a bachelor’s degree in industrial arts education from SUNY Oswego, served as an industrial engineer for Drummond Aircraft for two years, and worked as a private contractor for five years, and has spent the last 24 years teaching at Greenwich Country Day School.
On that school’s website, McKenna narrates a two-minute video which emphasizes recycling, hands-on instruction, pupils using modern wood-shaping machines, and especially student enjoyment. “The spring project focuses on Adirondack chairs, a settee, a rocking chair, a footstool, or a side-table,” he said.
And speaking of Adirondack chairs, there are more than a dozen sprinkled here and there around his property, many of them placed around the cat’s house. The cat’s name is Murphy and insisted on being part of the interview. McKenna and his wife Pamela let the cat stay there after they moved to a beautiful gambrel-roof Cape Cod-style home that McKenna built from scratch. “The only thing I did not do was the dry wall,” McKenna said.
McKenna’s dad had built the house they lived in during his growing-up years. “We had a shop in the basement with all the tools: a table saw, a radial arm saw I still use, just like the wood lathe, jointer and planer. Dad had sold the drill press before we moved. I still have his drill bits and clamps.”
McKenna volunteers to teach and organize woodworking projects for the Boy Scouts; in addition, he runs family workshops in boatbuilding at the Connecticut River Museum in Essex.
So Murphy’s house now is almost like a woodworking museum. There are a few ship carpenter’s chests of all sizes, whirligigs the shape of a sperm whale, half-hull models of ships, ditty boxes of all kinds and sizes, name boards, side-tables, christening boxes, fish-shaped cutting boards (or serving platters), and odds and ends like inlaid coasters, and circular ditty boxes.
During weekends, McKenna offers workshops to construct traditional and you guessed it — seafaring-inspired items, such as a ship carpenter’s chest, a lobster buoy bird house (like you’d find in Maine), an Adirondack chair, a carved pineapple, and one on whirligig weather vanes. Those workshops were well-attended (closed in no time); the following workshops are going fast:
June 9-10 — Adult Adirondack Chairs
June 16 — Maple Fish Cleat Cutting Board
June 25-29 — Scallop Shell Ditty Box
June 30-July 1 — Connecticut River Shad Boat Half-hull Model (There are two spaces remaining for this popular workshop)
July 9-July 13 — Sea Chest
July 20-22 —Name Boards
July 30-Aug 3 — Sheraton Side Table
Aug. 10-12 — Nantucket Basket
Aug. 24-26 — Christening Box
Sept. 15-16 — Noank Sloop Half-hull Model
Sept. 22 — Cherry Cleat Serving Board and Fish Cutting Board
Sept. 19-24 — Oval Whale Ditty Box
Sept. 29 — Happy Jack Whirligig
If you sign up over the phone, you might change your mind once you see the workshop and the wide variety of items decorating the walls and end up signing up for more than one. As it says on one of the flyers, “Take hands-on classes inspired by our maritime heritage! All skill levels welcome.”